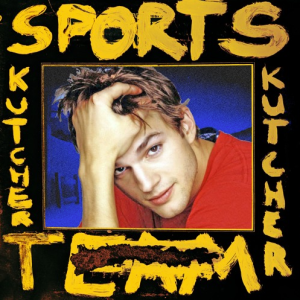 Let’s write a song about a TV show that hasn’t existed for years, that’ll show we’re down with the kids. Come on Sports Team, where have you been? The kids are into Love Island, shoving condoms up their noses and crying in the corner. They probably don’t even know who this Aston Kutchner is, they probably only like your song because they’ve seen frontman Alex Rice parading around and pouting like he’s a ruddy peacock.

Seriously(ish) though, Sports Team are absolutely on fire and can’t seem to stop themselves or find the fire extinguisher – though one of them has probably nicked it to throw through a window for a laff. If you’re able to ignore Mr Rice and his nefarious antics, there are some corking guitar riffs and the rhythm section could easily keep up with the likes of Dexy’s with changes coming as quickly as greyhounds on a starter’s pistol. What a canny bunch they are, let’s hope they’ve got enough at this level for an album or ten.

They’ve even got a Rolling Stone in the video, like anyone under 21 has ever even seen a real life magazine before… Christ alive.