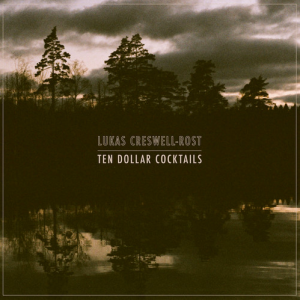 Due to my inability to convert currencies I’m not entirely sure if a ten dollar cocktail is expensive – I do know that I once bought myself a £9 cocktail and promised never to spend such a ridiculous amount of money on a single drink again. Finances aside, Lukas Cresswell-Rost has hit upon one of my sweet spots with his 80s soundalike track and the sheer sparsity that he affords himself with this song shows an awareness for the delicate nature of music that few dare to approach and even fewer are able to master in such a way as this.

As if it grew up in the shadows, this song creeps around almost as if it is afraid of daylight – though some may merely be adopting the darkness, this song was born and moulded without the need for light. There’s all the command of an army general, holding back legions of troops before a major battle with something as simple as the raising of an arm. We’re only treated to brief snippets of overwhelming creativity from certain instruments, making us long for more yet leaving Lukas in complete control of both his music and his audience. Though some of the sampled vocal snippets may be unsuitable for younger listeners, they do indeed help to add to the powerfully dark nature of this musical beast.

So lock all your doors and turn off the lights, the wolves are out tonight.