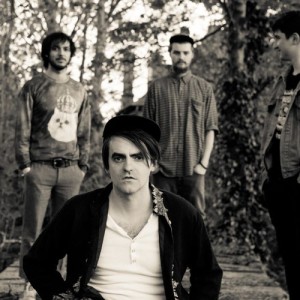 London-based Bellwether have put together a video for their latest track ‘Blind Anthem’ which cleverly cuts the band in with shots from classic Westerns – helping to visually portray some of the well-spun lyrics.

Lyrically, ‘Blind Anthem’ relies heavily on the Western theme and it’s refreshing to see such a commitment and awareness of what would probably be considered an obscure topic choice. On a musical level such inventiveness is perhaps a little lacking and, despite the occasional quietly brilliant guitar riff, there isn’t too much to really make the band stand out. This isn’t to be over-critical – they’re clearly talented musicians who have a natural talent for song-writing yet I’m struggling to pin-point a unique, defining characteristic to make rise above the wealth of indie competition.

That being said, it is nice to hear from a band who were clearly heavily influenced by the indie bands that spawned not long after the turn of the century and a perusal through a wider selection of their tracks could well highlight some further pockets of interest. Perhaps I was just a little sidetracked by the similarities with ‘Use Somebody’, but for any further releases from the band it would be nice to hear a little more individuality and development.