Having thoroughly impressed me with their performance at The Indigo Sessions, I made it a personal mission to get a chance to sit down and have a chat with Londoners Nöme about their stylish brand of music. With rushing synths and pounding beats, the band have all the makings of a genuine stadium rock outfit and it doesn’t seem entirely out of their reach. I caught up with singer/keyboardist Rachel Still and drummer Kayleigh Cheer to find out a little more about the band;

How did you guys first get together as a band?

Kayleigh: Do you want the long version or the short version? The long version: Rachel was already in the band and the way I joined was after they made an advert that was a bit of a piss-take. They had a picture of a drumkit and it said ‘we need a drummer to help us take over the world’ and my friend, who knew I was a drummer, took a photo of it and tagged me on Facebook because she thought it would be funny as I’m really big headed so she thought I’d want to take over the world. I actually liked all the influences on the advert so I decided to actually call the guys so that’s how I ended up there.

Have you still got the advert some 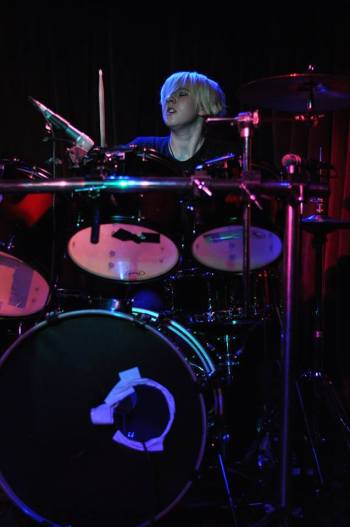 Kayleigh: I do still have a picture of it!

Rachel: We met Jack (guitarist) through his university, we put an ad up there and George our bassist used to be in a band with Kayleigh as a guitarist and they bumped into each other in a bar.

Do you all work or study?

Kayleigh: Jack’s studying music at Goldsmiths, George works part-time in a bar, I teach drums and do some session stuff and Rachel bums around…

Rachel: I do graphic design but mainly run the band.

Well your email address comes up at ‘RJK Management’ as opposed to just your name which looks much more professional.

So who are you musical influences?

Combined: The Killers, U2, Bruce Springsteen, Jack’s really into Muse, George is into Coldplay, Fleetwood Mac, there’s a lot of Blondie.

I can definitely hear the Blondie.

Rachel: We’ve got a lot of old and new but everything’s really bit. None of us are into particularly small stuff so it’s kind of…

It’s about being a powerhouse band?

Kayleigh: POWERHOUSE! (in a voice not unlike one you’d hear on Street Fighter)

Kayleigh: iTunes once described me as a powerhouse drummer when I was in another band, that might be my proudest moment. I wanted a t-shirt. I told you I’m big-headed. 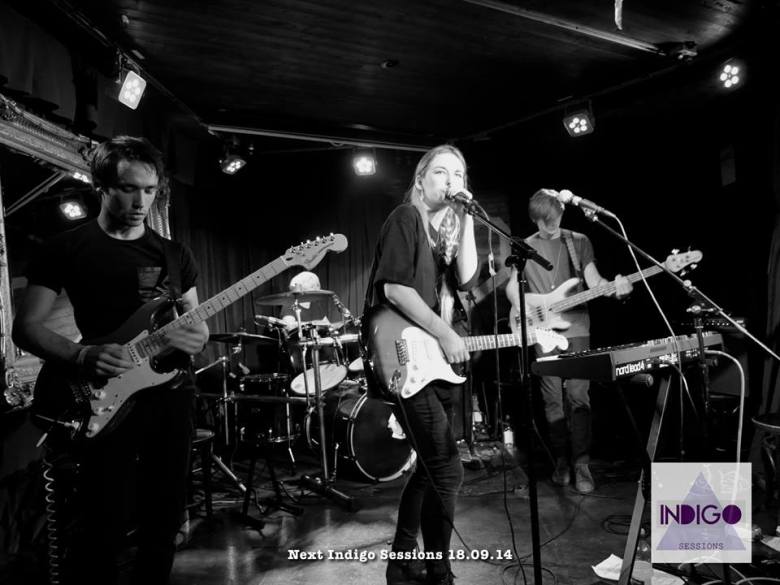 One thing I really picked up on is the huge 80s style sound. Firstly, aren’t you a little young to be writing 80s songs?

Rachel: I guess my influences really come from The Killers and beyond that into Pet Shop Boys and Depeche Mode – my keyboard mind comes from all of that.

Rachel: Not quite that far but I guess New Order and all that stuff, I guess actually there is a bigger 80s influence than I realise.

But yet your big hit is ‘Nineties Child’? I don’t know the lyrics to memory but is it about what it was like growing up in the 90s?

Do you feel like you’re a part of ‘Generation Z’?

Kayleigh: I try to fight that power generally.

Rachel: I have mixed views on it but I think if you listen to the lyrics in the song, people will see how mixed my views are.

Who writes the songs?

Rachel: I do the lyrics and the melody and then we stick it together. It happens differently for different songs really.

Kayleigh: It’s a really natural thing, any of us can come with an idea and it can end up turning into a song and a lot of it just gets left for later. Bits and pieces get stuck together – chords from here, a chorus from there.

Do you ever find yourselves recycling material? 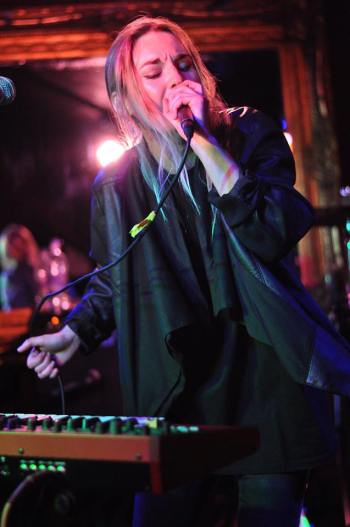 Kayleigh: I think because we write so much there is bound to be stuff that we never use because we’re just going to keep writing. It’s important to keep writing so that you write good stuff.

Rachel: I actually have a folder on my computer of Logic files just named ‘Crap’. The stuff that’s in there is probably quite good but at the time I didn’t like I so I put it in there. But I never throw it away so maybe someday…

Kayleigh: I guess with ‘Nineties Child’ the first time Rachel brought the riff and the lyrics to a rehearsal we loved it straight away and it was just written so quickly.

Rachel: ‘Whisper In The Night’ is still changing.

Is that because you’re searching for a definitive version?

Rachel: Yeah, we see ourselves as a live band and we’re quite young in that we’ve only been playing together with George for 4 months but as a band for a year. I guess we like to leave things to develop a bit and we’ve learnt that the best songs come about once we’ve seen what they’re like live and we’ve played them over and over. That’s the case for a lot of them, seeing how the crowd reacts and seeing what we get from it.

Have you released an EP already?

Rachel: We released ‘Eagle’ on 21st July which was our second EP – our first EP was released last year but our new EP is available on iTunes and Spotify, and Google Play.

Which everyone uses of course.

Rachel: I’m not too sure what’s going on with it… But ‘Eagle’ is out now. It was recorded in Assault & Battery, Alan Moulder’s studio by Darren Lawson (White Lies, Ben Howard etc.)

What’s planned next? Will you go for an album or are you more interested in live experience?

Rachel: I guess we’re really trying to expand our fanbase, we want to play to as many people as possible. We’re proud of the EP but I think we’ve got more to give so we’ll probably always be working on new stuff. It’s never done. We’ve got some really good live shows coming up – 22nd August at Dublin Castle is the next one. It’s all about live shows and just getting our name out there.

Speaking of the name, it is pronounced like gnome isn’t it? Because Cavaliers and I had an issue working out if the umlaut had any effect…

Rachel: It can and it can’t.

Rachel: It’s not meant to have an effect but I guess if people want it to… 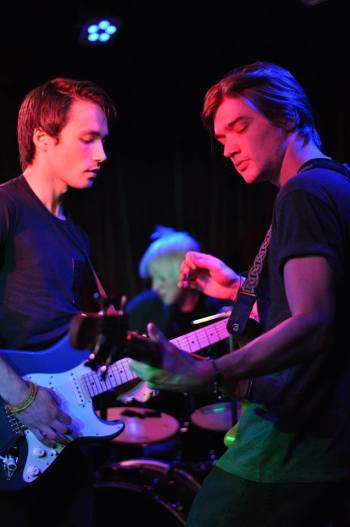 Where did the name come from originally?

Ok… So where did you get it from?

Rachel: We nicked it from them. We used to be called Nome And the Natives but we didn’t like the us and them element. People used to call me Nome but that wasn’t how it was. It’s not like Florence and the Machine, we don’t want that.

Are there any bands on the same level as you that you’re into?

Kayleigh: We were both talking about The Pierces, they’re signed but they’re new.

It’s all coming out now…

Rachel: Jonny Breakwell I was very impressed with. I always struggle to answer that question because I love BIG SOUNDS, I want to see The Killers at Wembley, I want to see U2 at the O2. So for me when I see smaller bands it just isn’t my tastes.

Kayleigh: There’s a band I’m into called Dressmaker, they’re gigging all the time at the moment. The lead singer is one of my drum students, that’s how I started getting into it but I love their stuff.

Rachel: Most Thieves are really good too, we recorded our first EP with them.

Was it a split EP?

Rachel: Basically the guys who are in the band do a lot of session-ing and are top musicians.

Kayleigh: She opened for us before.

What do you think of the sound of London? So far we’ve heard trains, traffic jams and police cars, do you find that your sound is London demographically or is it more broad?

Kayleigh: As a band we’re influenced quite heavily by a lot of American bands and we associate with a lot of American ideas, I can imagine our music would go down really well in America. It’s on our plan. Because we’re British as well there are plenty of British influences.

Rachel: Someone once said to me ‘you make the scene come to you’ so while I used to think we should go to America, I believe that wherever you are is where it’s at. If it’s meant to happen it’ll happen. I think London is a great music scene but anywhere is going to be tough nowadays.

Kayleigh: We’re lucky to be here – a lot of bands travel here to do their gigs but we’re all based here so it makes sense to make the most of everything in London.

Rachel: People thought The Killers were from Camden but they’re from Las Vegas…

How important do you think the extramusical factors are? You can do whatever you want with your music to a certain point but then the outside factors will almost always come into play, do you think that’s particularly important in being successful?

Kayleigh: I think it’s good to have a band image and it’s good to be aware of how you look on stage and what impression you give but I don’t think it’s the be all and end all. A lot of musicians are very shy and very secretive, never giving anything away, and that can even be a positive for them as more and more people want to know about them.

Rachel: I think it depends on what kind of person you are. For me, The Libertines have a chilled out image but they’ve still made that choice. Whatever you choose is still a choice. We don’t try too hard but I think it goes hand in hand.

Kayleigh: We’re all very similar people, we’re all friend in real life, all the same age and have all grown up in the same sort of families so it isn’t like we all have to look one way, we just naturally do. We all would hang out anyway.

You mentioned trying hard but not trying too hard, I read that La Roux spent months trying to make her new album sound effortless – do you think that’s an essential attribute of music?

Rachel: I think that’s a very good quote actually because you can have a good product instantly but when you get down to the minute details and the nitty-gritty it can be very hard work.

One last question, who is your least favourite cartoon character?

Kayleigh: What’s the thing that chases the ‘meep meep’?

Kayleigh: Yeah, he used to stress me out. Just give up!

Rachel: I get a bit annoyed by Fairly Odd Parents… I love Spongebob, a a few other cartoons.

Kayleigh: He’s not asking what you love, otherwise we’d be here for hours. The thing that chases the ‘meep meep’. Never been a fan.

Catch Nöme on 22nd August at Dublin Castle, 28th August at Fiddlers Elbow and 27th September at Camden Barfly. You can keep up to date with them on their website and through Facebook, Twitter and Soundcloud.