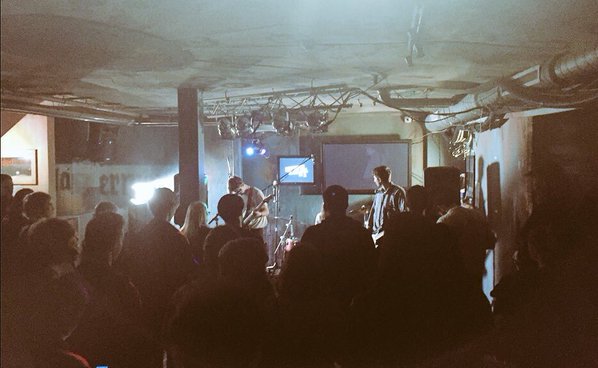 If you’re the sort of person who likes their guitars bursting through the cracks in the walls with a ferocity that would beat even the most hardened heavyweight to shame then you’ve probably missed out one of the most ear-blowing gigs of the year. The folks over at Jagermeister got together with this tiny music blog called DIY to put on a night of sheer aural joy down at Strongroom Bar in Shoreditch that your ever-tipsy host indulged in and had a ruddy good time.

Opening things up to a rather undeserved small audience (this lot were undoubtedly worth the ticket price alone) were noise bandits Gang who set a rather high bar in terms of volume, distortion and, probably most importantly, that thing some people like to call ‘talent’. Making sounds about as boisterous as a coked up Mick Hucknall trapped inside a titanium box with but a few air holes available, the three piece cranked up a notch on the hypnotic/grunge scale by utterly dominating the room with a barrage of sounds so blissful that there were enough bitten lips in the crowd to leave you wondering if a quarantine might be needed. With no mucking about these three gentleman would have woken your brain right up if you hadn’t had time for a few wee snifters beforehand.

They were swiftly followed by the equally impressive Birdskulls who continued the evening with much the same ferocious style. If, like me, you’re a mid-20s music-obsessive then you’ll be hearing plenty of callbacks to your teenage years and wishing you could once more jump around with the sort of energy you used to on a Tuesday night without the fear of having to go to work the next morning. But this was exactly the sort of night you’d take a hungover day in the office after and the vocals that seem to travel right up from the darkest part of the gut showed exactly why a mid-week gig can be just as fun as a big Friday night bender. With every last cymbal hit, bass run and wave of distorted guitar heaven the room became engulfed by what these three had to offer and it felt more right than even the fuzziest of carpets under your feet.

And finally it came to the veterans Johnny Foreigner to see out the evening. Having been preceded by a pair of bands with with young, vivacious energy it was good to hear that the old guard still haven’t lost their touch. With undertones of The Wedding Present running through the vocals which had that disgruntled with the daily grind feeling and the general speed and intensity that you’d expect to hear from 18-year-old wannabes getting over-excited about their first proper gig – though this lot have got plenty more style and grace and there was barely a single dropped note to be had. As the sweat dripped from every corner of the room and the building shook like never before you’d have to be a fool to not become addicted to the sonic treats that lay before you.

This appears to just be the start of ‘Curtain Call’, keep your eyes peeled for the next one as it’s sure to be just as peachy.