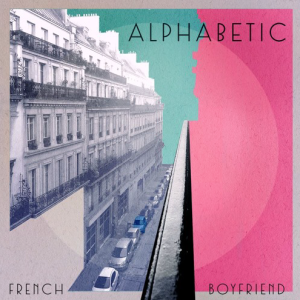 The band who released this gem which I repeatedly labelled my top tune of 2014 have got a brand new album on the way and, shock, I’m in love with Alphabetic yet again. They have such an uncanny knack for being able to put together a memorable chorus while fitting around it all sorts of marvellous sounds that are simply divine.

‘French Boyfriend‘ dropped over on Clash a few weeks back and ever since I’ve been dancing around to it in my pants. Think more male Bridget Jones than anything too glamorous. It has a number of similar hallmarks to ‘Good Lovers‘ and once more features the twin voices of Walter Heale and Rebecca Lever creating an aural bond which works so strongly whether they’re taking it in turns to pleasure your ears or harmonising with a unity that’ll have your eyes rolling back in your head. Catchy guitar riffs, the familiar synth stabs and the steadiness of the rhythm section all acts as ideal supports and the occasional interjection of something a little sweeter is always welcome.

The album Touch is on the way soon and there are a fair few belters on there but there’s no denying that this is the right track to send out first. It’s utterly flawless and fills you with hope that this lot will be peaking for some time to come.