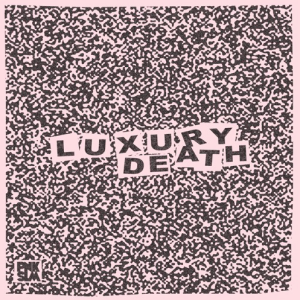 They’re going to be your new favourite band.

Right now that’s out the way, here’s why Luxury Death are going to take over your musical world and heavily rock your stripey socks in the process.

Brainchild of Manchester’s Ben Thompson (formely of Nai Harvest) and Meg Williams, Luxury Death are partners in both music-making and life-making and charmingly describe the project’s early stages as merely “something else to do in the bedroom together.”

Things blossomed quickly and now they’re a full band, signed to PNKSLM – home to Beach Skulls and Pinemen among others – churning out lo-fi pockets of droning synth and part crunchy, all scuzzy guitars. Pockets that they give utterly charming names to, like debut single ‘Radiator Face‘, don’t remember being called that one over the years in college, must be a pretty new one.

It’s a sleep in till mid-afternoon, scuzz-ridden hangover complete with sweaty-bedsheets and a fucking banging headache. All’s good though as long as you feel at home on each other’s collarbones, right?

We’re told there’s more to come this winter, likely in EP form, so that’s worth waiting up for. There’s also a flurry of live dates on the horizon this autumn including a Manchester sesh with Twin Peaks – frankly unmissable if you’re asking, as you should be.

Luxury Death sounds like the way I want to go, when I go. Can I go?