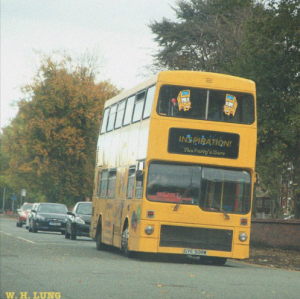 I thought I might have read a book by W.H.Lung during my A-levels but, to be completely honest, I’m still not 100% sure if I can actually read or write so that could have just been a passing dream. Or maybe this bunch have secretly crept into my room in the middle of the night and started implanting all sorts of false memories to try and make sure they’re on my mind.

To be fair, they didn’t need to go to such terrifying lengths as I’m pretty taken aback by their debut single which is filled with spaced-out, kraut-rock goodness. With shades of what The War On Drugs could have been if they were from his side of the Atlantic the Manchester psych trio will have you tripping out before anything has even touched the tip of your tongue. This one is set to bring on some full-throttle hypnosis and it’ll leave you desperately craving another bite of what they’ve got to offer.

If you’re stuck looking for inspiration this might just be exactly what you’re after. Because it’s called inspiration. Get it? Do you get it???