You might be forgiven for thinking L’Amour Bleu were a trendy French band, cigarettes loitering in the corner of their mouths as they show nonchalance and other stereotypical attributes. In actual fact, they were formed by Bloc Party’s Matt Tong and Palms’ Ryan Schaefer in New York and are more avant-garde punk than smashing up a radio with an extremely over-cooked sausage. They’ve got an absolute banger called ‘New Dominance‘ out so I got an all expenses paid trip to NYC to ask them some pressing questions. Na, I just emailed over some rubbish and they actually replied – what gents;

So what’s L’Amour Bleu all about? Why did you decide to start the project?

MATT: Ryan and I were housemates when I first moved to New York and I played drums with his previous band, Palms, for a show at MoMA PS1. After that, I yearned to do a band with Ryan because he’s tres cool and I thought some of it would rub off on me…

RYAN: …We started because we thought the music scene was feeling scrotumless and saturated with cookie cutter indie normals.

MATT: That feels like a pop at my previous incarnation but whatevs. I think L’Amour Bleu is an attempt to repurpose rock music in order to construct a more “helpful” narrative about masculinity in 2017. There is a certain amount of bro-iness underpinning some of our oeuvre since we’re informed by music that comes from different times with different mores, but we’re trying to subvert that in a playful way. Also, I’m just so sick of band-as-fully-realised-entity and to that end…

How did you meet? Was it a meet cute like in the movies?

RYAN: Didn’t we meet at the Russian Turkish baths in the East Village?

MATT: But the first time I became properly acquainted with you was when I was stuck in New York because my lung had collapsed on tour and I couldn’t fly anywhere. We went to some weird wrap party for a tv show or something and that douche Mark Ronson was djing and I remember staring up at you wondering why the tall man in the long coat wasn’t saying anything. As for the rest of the band, Shane used to be Ryan’s boss and I got to know him when I forced them both to redecorate my dining room. That this ended with plaster busts of mine and Ryan’s faces hammered into the wall was significant, I think.

R: Shane is key: for us he art directs, dances, hits the bongos, accessorizes and plays samples.

M: As for Asher, he moved in after Ryan moved out and I knew he could play a bit from the sound of him practising guitar in his bedroom. He’s extremely literate, whereas I have a hard time thinking myself out of a paper bag, so he’s a great mind to have in the band.

Cracking artwork for the album – why? And are you in any legal trouble or is it all cushty? 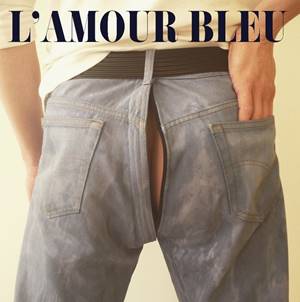 R: Our friend, Maayan Zilberman, took the pic randomly. She was excited by the zipper my mom had sewn into the back of my jeans. We used it for the sleeve because it speaks to Bruce Springsteen’s “Born In The USA” and The Rolling Stone’s “Sticky Fingers” covers in an interesting way and sort of sums up our attitude and some of our lyrical content, which we feel is different than a lot of what’s happening with basic bands these days. Why would there be legal trouble? Also one of us is a lawyer so it’s all good.

M: Your mum’s cool. I can’t even play mine the record.

With you having backgrounds in well-known bands do you think this helps or hinders your new project?

M: I don’t think it hinders. But I don’t think it particularly helps either. In any case no-one really expects much from me because I was a drummer in a band that was sort of a legend in its own lunchtime in 2005 and then vanished off the face of the earth subsequently.

So there’s a Little Richard impersonation involved in your latest video. What’s going on there?

R: CP Lacey, the impersonator, is major in the impersonation world. I wanted to have a video about Little Richard and some imagined friends of his acting the fool. I had been reading a lot about Little Richard’s personal life. He was an innovator and stood outside the status quo personally and musically. It made sense to make him the face of New Dominance, which is essentially about a force that comes in and changes everything. Another actor in the video, Raul De Nieves, is an all around artistic badass that we have known a long time, which is why we thought of him. Taj (with the muscles), Takemi Kitamura (with the sword), Erik (with the v. pretty face) also rule.

How many deer do you think you could scare off with just a newspaper? Please show your workings.

R: I only see deer on Fire Island. Nobody reads the newspaper there.

What are the best and worst things about being in New York? How’s the pizza?

R: The best thing for me is the mix of people and the activated energy. I’m from St. Louis so I like pizza which is a cracker with ketchup and provolone on top. NY style isn’t my favorite but it’s pretty good.

M: Until I came here I’d never eaten a pizza that wasn’t from a freezer so I assumed that NY style was non-freezer. The first time I saw someone tossing dough I became enraged. So nasty. Worst thing about NYC? Giuliani’s stupid fucking face.

R: Trump has completely fucked up the traffic situation in my neighborhood ugh.

M: I was watching “1991: The Year Punk Broke” recently and Thurston Moore’s just on a tear that whole film. He won’t shut up. Anyway, there’s a bit where he’s going on about George H.W. Bush and it’s so trite and I love the idea of transplanting 1991 Sonic Youth into the present and seeing them have to come to terms with this complete and utter shower of shite. Now, let’s see you put your cynicism to good use, X-er.

Which artists/bands are most exciting you at the moment about the future of music?

M: Woah, cool! I’ve kind of given up looking for new stuff. There’s a new musician or band every ten seconds. It’s confusing, man. I normally listen to Scott Walker when I’m making dinner but lately I’ve devolved into YouTubing the music that played whenever the BBC showed their testcard to fill up dead space on the schedule. Oh, I thought the Heimat record from last year ruled.

What have you got lined up next?

R: We’re shooting a video for a track called “Sisters” starring Bailey Stiles. The song is about this dude that used to stalk my three high school aged sisters when I was 8…

M: …and we’re going to try and play some house parties here before people forget you can see other people performing at house parties.

Check out L’Amour Bleu on their fancy-pants website and find out when they’ll be playing a house near you.