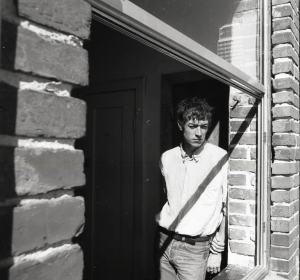 As a long standing fan of Heavenly Recordings, I’ve developed a love for many of the artists on their roster of the years, one of which was Huw Evans or H. Hawkline as he’s more commonly known. That loved developed following a few listens of his wonderful LP In The Pink Condition and in particular track ‘Everybody’s On The Line‘, certainly worth a revisit if you’re as yet unaware of his brilliance.

Fast forward a few years and follow-up I Romanticize is on the way, due June 2nd on the aforementioned Heavenly Recordings and previously teased by the ace ‘Last Thing On Your Mind‘ ft. Cat Le Bon. Along with the albums announcement last week however came a new preview, a quite a memorable one too, in the form of the beautiful ‘My Mine‘.

For this record, Evans travelled from Narberth, Wales, to Los Angeles to meet with long-term collaborator Cat Le Bon, who forms part of the band that plays on the new LP’s 12 tracks alongside Warpaint’s Stella Mozgawa and composer Josiah Steinbrick. Evans has since described this record as his most natural work yet and based on this cut, you wouldn’t argue.

No-one sounds quite like H. Hawkline, it’s the delivery I guess, distinctive and subtle with simply stunning instrumental surroundings. It’s so refreshing, from the gentle winding guitar lines and mellow keys and percussion to the low-key bass throbs and well beyond. Bring on the new LP.