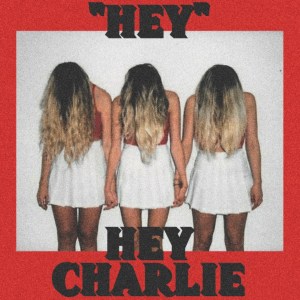 Say hey to Hey Charlie, a London trio who know exactly how to make an entrance – if effortlessly cool debut single and anthemic foot-stomping-head-banger ‘Hey‘ is anything to go by. You don’t prick up the ears of Kerrang! and Spotify within seemingly seconds of putting out your debut if you’re not worth talking about and believe me, Hey Charlie are seriously worth talking about!

Produced by Spring King’s Tarek Musa, ‘Hey‘ is a debut full of promise that embraces their love for ’90s grunge and punk right from its formative steps, before becoming a fully fledged girl gang anthem, hitting back at the stereotype that you can’t be both feminine and deliver a dose of heavy sounds that can knock anyone for six.

There’s hooks everywhere; from the opening bassline to the ultra contagious kick into the chrous and round pretty much every corner in between. It’s a youthfully grungy anthem supported wonderfully by fragments of the ever beating heart of pop.

There’s so much more to come, this is merely a banging statement to tease us and give us a taste of what Hey Charlie are about (and tease us it has).

They’re also absolutely killer live, so I’m reliably informed, so we’ll see you at the front of a show very soon, yeah?

Of course we will, even a fool wouldn’t miss this ride!