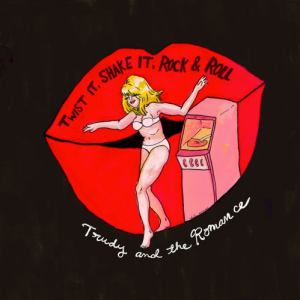 Every song Trudy and the Romance release seems to stir up the same kind of mixed feelings of nostalgia and giddiness inside me that it feels like I’m a toddler going round and round the same indoor play area with reckless abandon.

So on the latest beaut ‘Twist It, Shake It. Rock & Roll‘ the band once more delve into a rich heritage of old school rock’n’roll for their inspiration before giving it their patented ‘mutant’ twist. My first instinct on hearing this was that they’d covered ‘Uptown Girl‘ but, as always, they’ve gone their own way and walked a path that few would even notice was there. That blend of classic tunes and futuristic edges keeps the band forever twirling into genius as they’ll have you up doing the hand jive while flying cars whizz past the window. Those harmonies are sweetly mean while Oliver Taylor’s distinctive brogue whispers tales in your ear as if he’s baring his soul with head bowed.

Perhaps it’s the way everything sounds so simple and familiar that makes them such a comforting band to listen to. Or maybe it’s just the fact that they right some absolute corkers while make me so giddy I need a lie down afterwards.