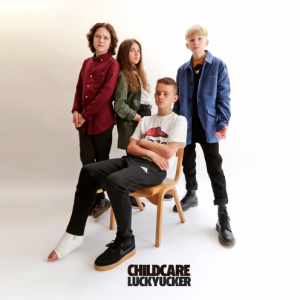 Ed Cares (frontman of soon-to-be Heavyweight Champions of Your Ears, CHILDCARE) gives this description for the influence behind ‘Magazines‘: “On the way to Hampstead Heath last year I noticed a Big Issue seller who looked different from normal; a well-spoken, middle aged, white and middle class woman. This song is about the surprise of seeing someone from my tribe selling the magazine on the street, the realisation that any of us could end up there, and the guilt of feeling a particular sympathy towards her.”

(Have I hit the word count? No? Damn)

Mr Cares has long been someone who really puts thoughts into tracks and builds his personal experiences into the lyrics, with the phenomenal ‘Kiss‘ being a stellar example of this. The band have always found a way to keep things fresh and so unlike any other sounds and this latest beauty sees them once more take steps that others would shy away from. Whether it’s the backing vocals transposing throughout, the acoustic section being thrown in for good measure or just their general swagger that lets you know these really are the cool kids, CHILDCARE seem to make things come so easily. Hell, they can start saying ‘Luckyucker’ and you’ll believe it’s a word because you just want them to say they like you SO GOD DAMN BADLY.

Surely that’s enough words now? Obviously I love this band so much that I’d buy them all an ice cream and expect nothing in return but a hearty handshake.