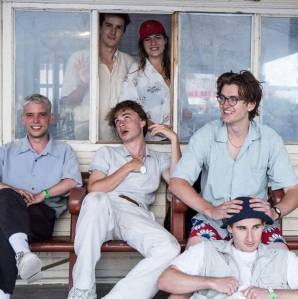 Who does Alex Rice think he is? Taking a bunch of people down to Margate on a bus, parading around in the street like some kind of loon in VERY questionable shoes and just generally looking smug about it all?

Lucky for him, Sports Team are actually pretty good or he’d have so many eggs melting over his hot face that it’d be a detriment to the farming industry. ‘Margate‘ might just been the band’s best track to date, despite Rice’s best efforts, as it whips up into an indie frenzy the likes of which would surely send Margate residents over 50 into an absolute headspin. In under three minutes you’ll get the aural equivalent of a double shot espresso in your ears with riffs, beats and the general content of an indie song coming together in a really catchy way. All pantomime aside, this is one of my favourite tracks of 2018 so far and as much as I’d love to hate Alex Rice his band have got something excellent about them which is just as overwhelming live as it is in the video below.

The guitarist looks like a nice chap though, maybe the posing peacock could learn a thing or two from him.